Shirley Temple appears in the animated doodle as a diplomat, an award-winning actor, and a young dancing girl. On three movie stubs, the name of the search engine shows at the bottom of the Doodle.

Teresa Caltabiano, her granddaughter, spoke about the Google Doodle and her grandmother's legacy "Her family was at the centre of everything. We were fortunate to have known her, her love, courage, and strength. We cherish our memories of her since she is still much loved and missed." 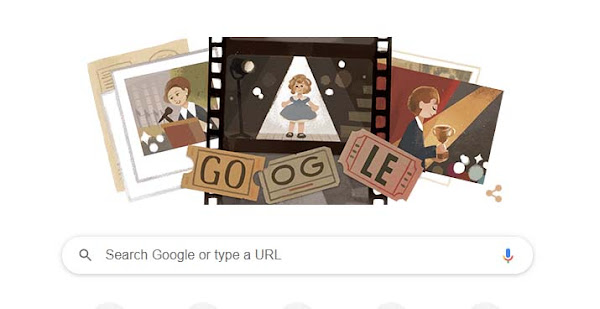 Shirley Temple's journey from renowned child actress to breast cancer champion is astounding. Ms Temple, who was born on April 23, 1928 in Santa Monica, California, began her dance lessons at the age of three. With her distinctive dimples and blonde ringlet curls, she charmed the audience in the 1934 toe-tapping musical "Stand Up And Cheer."

As Hollywood's top box office draw, she helped millions of Americans get through the Great Depression. Later, through her job in international relations, she was able to share her charisma with the rest of the globe.

Ms Temple appeared in a dozen films in 1934, including "Bright Eyes," in which she sang "On the Good Ship Lollipop," one of her most renowned routines. Ms Temple was one of the most well-known actors in American cinema before the age of ten, and she was the first child performer to win an Academy Award at the age of six.

Ms. Temple made a name for herself in 1942 as "Junior Miss," a radio sitcom about a teen girl growing up in New York City. She continued to act in films throughout her adolescence and retired from the film industry as a Hollywood legend at the age of 22.

In 1969, Shirley Temple was appointed as the United States' representative to the United Nations. Her political career includes serious environmentalism, which included representing her country at the 1972 United Nations Conference on the Human Environment. In 1988, she was named an Honorary Foreign Service Officer in recognition of her diplomatic achievements, which included serving as ambassador to Ghana and being the State Department's first female Chief of Protocol.

She died at her home in California on February 10, 2014, at the age of 85. Alta Mesa Memorial Park is where she is interred.